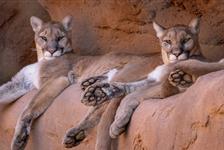 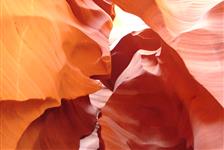 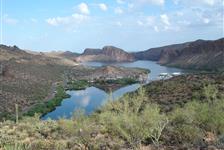 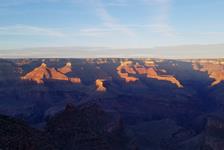 Check out our other great Phoenix Things to Do.
View All Things to Do
Need Help? Contact Us!

Tour the days of the Wild West from the comfort of a premium passenger vehicle. The Tombstone Day Tour highlights the city’s infamous past of Western lawmen, bandits, cattlemen, and mining. During the day tour, visitors explore Tombstone and Southern Arizona’s top destinations such as the Tombstone Courthouse, Big Nose Kate’s Saloon, the San Xavier del Bac Spanish Mission, and beyond.

from Ashley, one of our Phoenix Travel Experts
Read More

from Tombstone Day Tour
Travel back in time to one of the most famous Old West towns with a day on the streets of Tombstone. The home of the famous OK Corral lets you experience the lives of outlaws, businessmen, miners, and cattlemen who flocked to the area for a chance to strike it rich on the frontier.

A ride straight from your hotel takes you out of the city for your visit to the historic town. While you're in Tombstone, pay a visit to the original gathering spots for outlaws and gunmen, like Big Nose Kate's Saloon and the Bird Cage Theatre, which earned a reputation as the wickedest night spot between Basin Street and the Barbary Coast.

When you step into the museum at the Tombstone Courthouse, learn about the men who were charged with keeping the peace in this rough-and-tumble town. True to the reputation of the Wild West, gunfights and stand-offs were a regular occurrence, and many of their victims are buried at the infamous Boot Hill Cemetery—named for the men who died and were buried, with their boots still on.

On your way back to your hotel, visit the White Dove of the Desert; one of the Southwest's best-preserved missions at San Xavier del Bac. Founded in 1692, the San Xavier Mission is still in operation and allows guests to marvel at the ornate craftsmanship showcasing both Spanish and Native American influences. Original frescoes and statuary are still on display within the mission for guests to admire as well."

Departure Location:
Most hotels in the Phoenix, Scottsdale, and Tempe area

Notes:
A minimum number of guests must be met for this tour. You may be booked on stand by until the tour is confirmed.

Guests must bring a driver’s license or Passport on the Tombstone day tour as we are traveling close to the US/Mexico border.
Read More 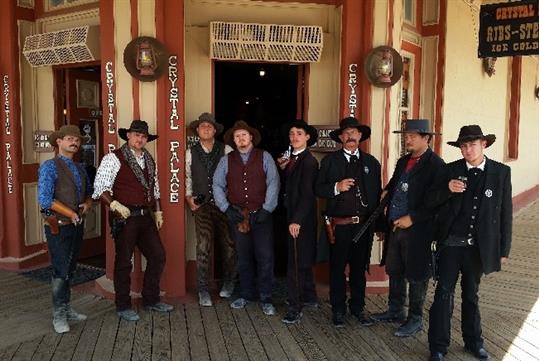 Have you been to Tombstone Day Tour? Share your knowledge and be the first to review this.
Write a Review
Back to Top

How long is the tour?
The tour lasts 12 hours (approximately).

What can I bring?
We recommend no more than a day pack. A small pack with easy access to a wallet, camera, etc.

What should I wear?
We recommend our guests bring jackets in the event of changing weather patterns. Are any of your tour guides bilingual? Yes! We have guides that speak Spanish, German and Japanese. Translators are also available in Italian, French, Chinese and Swedish.

Is smoking allowed on the trip?
All DETOURS vehicles are smoke-free.

Is transportation included?
Hotel pick-up is provided from most hotels in Phoenix, Scottsdale, and Tempe area.

What if I miss my pick-up?
We will work with you on the next day’s tour, if available; however additional fees may apply. Please call DETOURS of Arizona if you miss your pick-up.

When should I be ready for pick-up?
Pick-ups for this tour start at 6:00 am. We ask that you plan on being ready at the pick-up location 5-10 minutes early.

Is the tour wheelchair accessible?
Unfortunately, our vehicles were not designed to accommodate wheelchairs. Guests should be able to walk up 3 steps into the vehicle on their own with the help of a companion.

How much should I tip the guide?
A 20% tip is customary and graciously accepted.

Can I bring my own snacks and drinks?
Yes, except for alcoholic beverages.

Are there charging ports for cell phones in the vehicle?
No, we recommend bringing a portable charger for your electronic devices.

Is there WiFi in the vehicle?
No, and during parts of the drive, there may be limited cell phone service.

Are there bathrooms in the vehicle?
No, but the guide will make multiple rest stops along the way, though, and can stop at the nearest rest stop at the request of a guest.
Back to Top